The Painting on the Wall

When you walk into the St. Cloud River’s Edge Convention Center. What is the first thing you see?  It is almost always the mural painted on the wall by the stairs that go up to our second floor. This mural is a sight to see. A lot of work went into making this possible and we are proud to have it in our building. 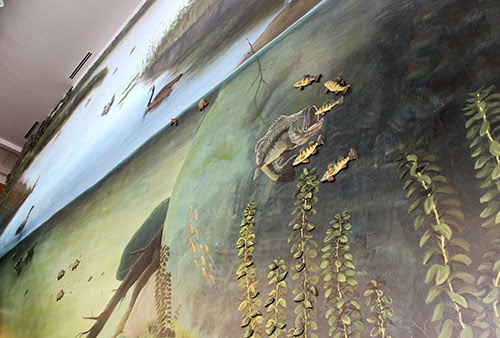 The mural represents the cross section of the Mississippi River as it flows through the town of St. Cloud, MN.  The Mississippi is the 4th largest watershed. It crosses 32 U.S. states and takes approximately 90 days to get from the headwaters in Lake Itasca to the Gulf of Mexico. The St. Cloud part of the river is lush in nature and wildlife and was a key aspect that they wanted to convey in the mural design. 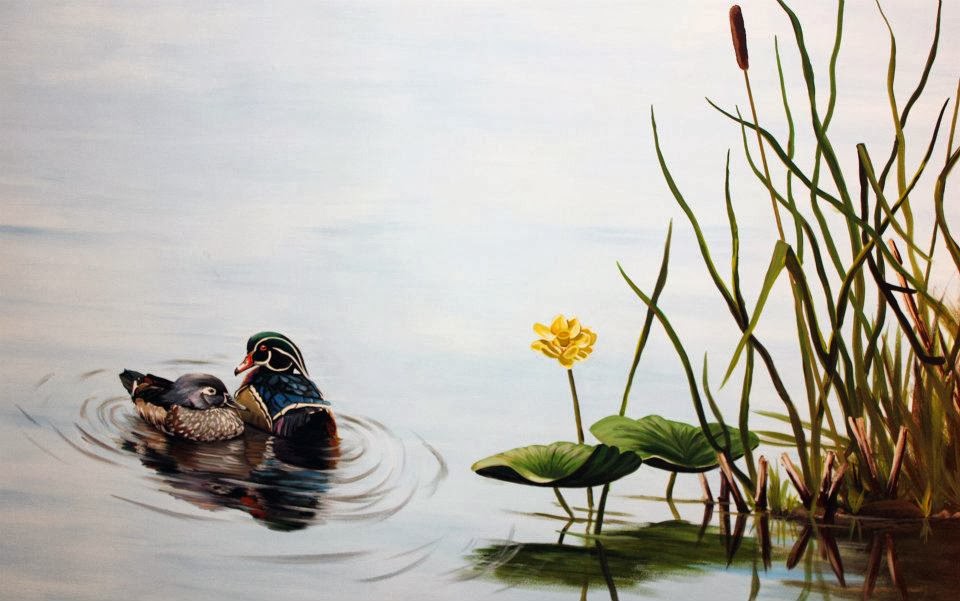 The painting process started in October of 2011 and was a collaborative effort of artists for 3 months. Melissa Gohman, the Visual Arts Director for the Paramount Arts Resource Trust was the director and driving force behind the whole project. The origin and idea for the wall came from the name change of the St. Cloud River’s Edge Convention Center, which was originally named the St. Cloud Civic Center. When the name changed it was important to focus on the river instead. 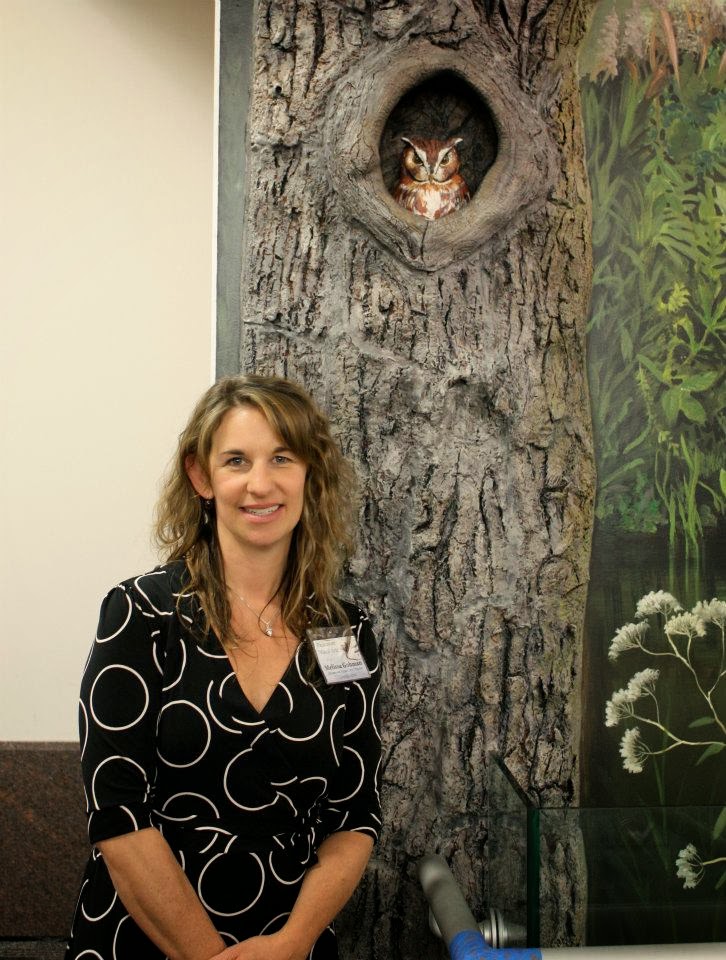 Willicey Tynes was the lead artist on the project. This mural was the largest painting that he has ever worked on. He was nervous as to what the painting would look like when the scaffolding came down, but he made sure to render the painting correctly and it turned out well! Dan Mondloch from St. Cloud State worked on the mural from the beginning. He started on the base of the painting first – the green and blue and worked his way to the detailed fish and leaves. 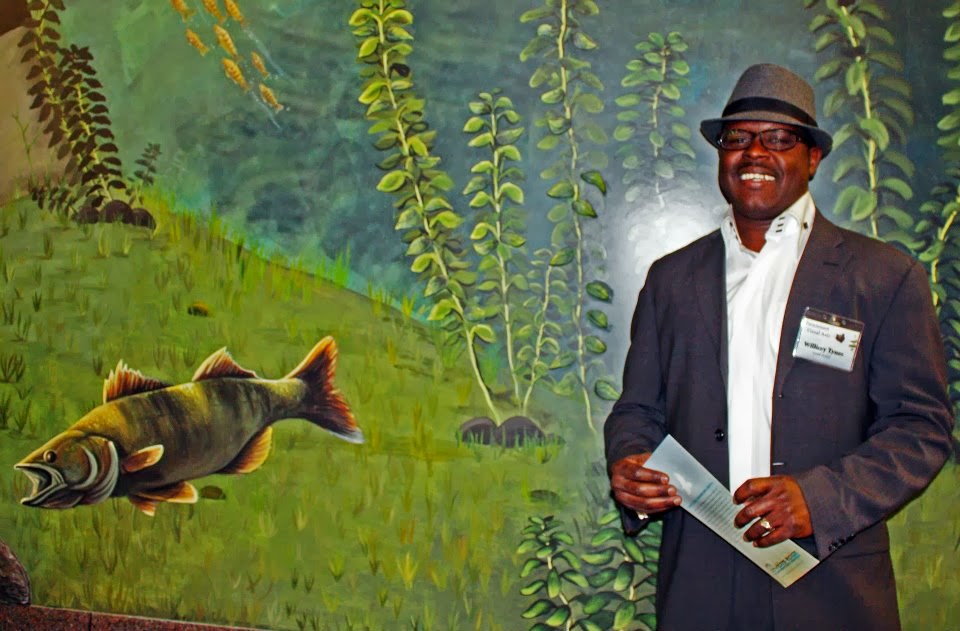 The mural takes place on an August day in mid-afternoon and there are over 118 species represented on the wall. The more species in the river, the healthier it becomes.  The mural features native species of birds such as Wood Ducks, Geese, King Fishers, Cardinals, Blue Birds, Bald Eagles, Great Blue Herons, Loons and Swallows. There are also wild flowers that line the banks that consist of Black Eyes Susans, Wild Bergamot and Showy Milkweed. The trees that line the banks are Maple, Oak, Birch, Willow, Elm and White Pine. Insects in the painting are beetles, butterflies and moths. The animals that roam the painting are deer, river otters, fox, and owls. 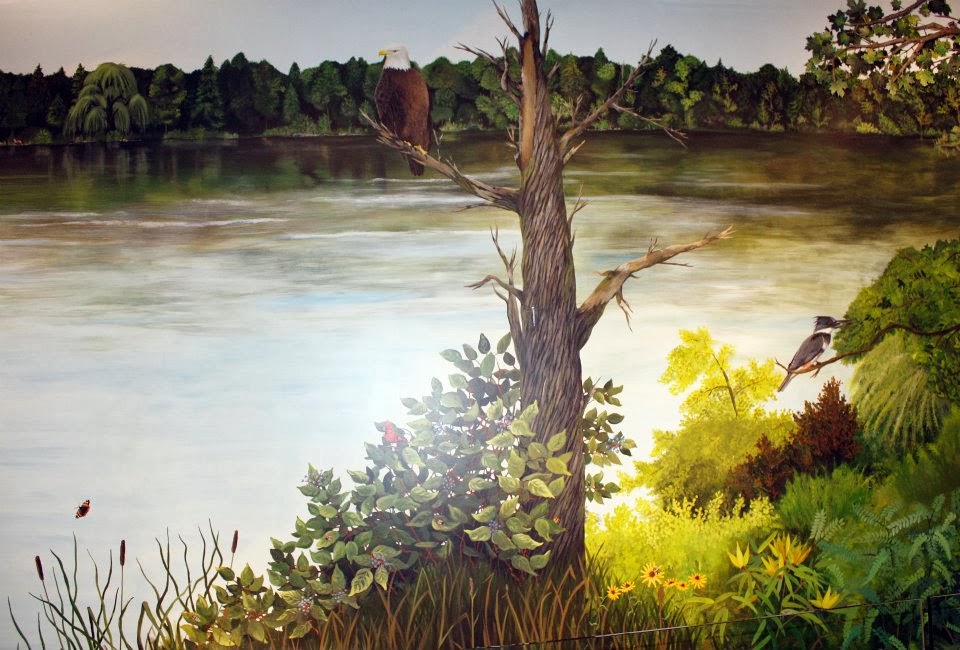 As they added species, the Camp Ripley Environmental Office checked species lists to see if they were accurate. There was also a species guide written to be incorporated into the piece. The mural has served as education material for teachers while doing field trips and for Biology classes to learn from. What a great resource for the community! 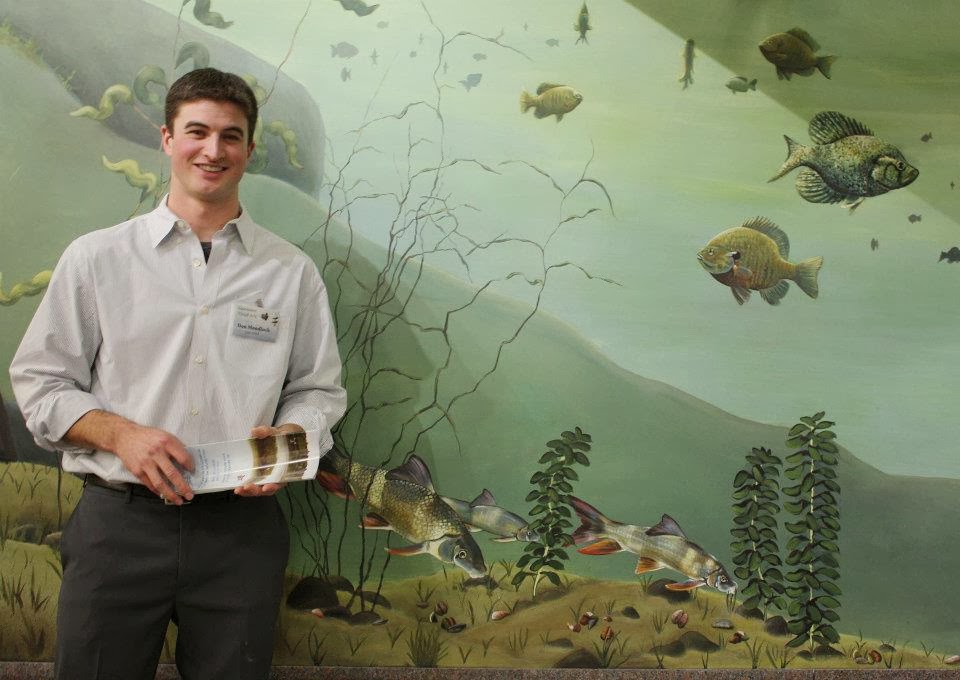 Not only is it a painting, but there are 3D elements added as well. Some animals, fish and plants are sticking out of the wall. It gives the mural a nice sense of push and pull and gives it that “real-life” look. Melissa Gohman, a ceramic artist, led a team of apprentices in creating the ceramic elements of the installation.  The first level is the underwater portion and the second level is what is above the water. The mural all together is 44 feet long and 28 feet tall. That is 2 generous stories to get the painting done well. 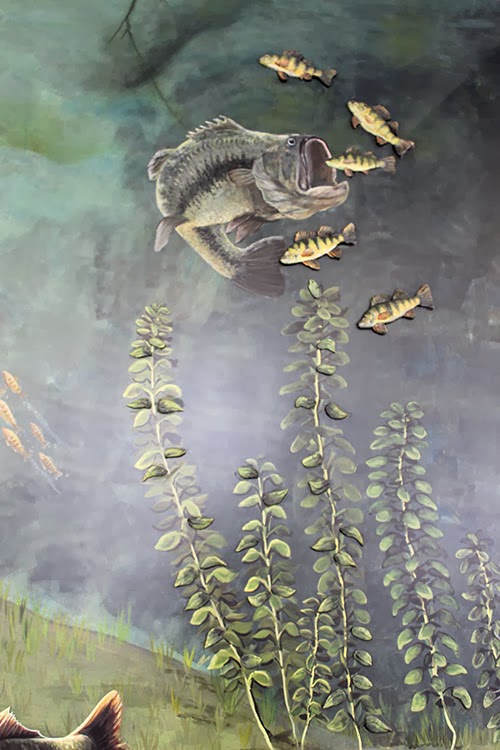 The goal in creating this mural was to support local artists and help them make a livable wage. Every artist on the project lived locally and was an artist that was committed to the community. The ribbon cutting ceremony of the mural was on January 5th, 2012. They unveiled it to the public by dropping a curtain and showing the whole piece.

Stop by the River’s Edge Convention Center today to see this amazing mural for yourself!